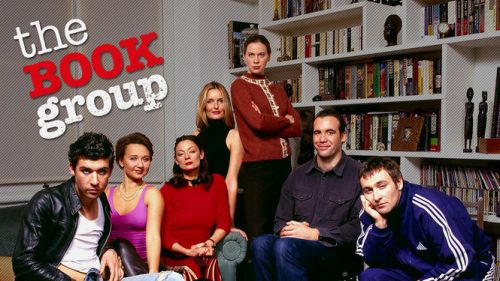 I found this show on my Netflix instant recommendations a month or two ago. I had heard good things from fellow bloggers, so I gave it a chance. I really enjoyed it, though it ended abruptly and that makes me very irritated when shows aren’t given a proper ending.

The show is really an ensemble, but the first episode at least centers around Clare (Anne Dudek, aka Amber from House), an American who has just moved to Glasgow and starts a book group in an effort to meet friends.  The first meeting is at her new flat, and she is rather shocked by the people who turn up.  I will say that none of these people would normally all be in a room together.  Claire is an intellectual (or she would describe herself that way, at any rate), and I imagine she expected people with tweed jackets and elbow patches to turn up, ready to discuss Jane Austen and do in-depth analysis of literature.  She does get one PhD student, Barney,  doing his dissertation on Garcia Marquez, and she immediately takes a shine to him, especially in light of the others in the group.  There’s:

Kenny, the wheelchair-bound aspiring novelist, who turns out to be the nicest of the group by far.

Janice, the footballer’s wife, who wants to be a TV anchorwoman.

Dirka and Fist, both of whom are vapid and superficial. One is from Sweden, the other Holland. Both are dating/married to footballers, if my memory serves.

Rab, who has zero interest in books it turns out, but is very interested in football (and the sexy men who play it).

None of them seem particularly interested in books, except Clare and Barney.  It’s obvious quite early that Clare looks down on the others in the group, but this fact is tempered by the fact that it is so easy to look down on her while you’re watching the show.  She is really rude, and despite hosting the book group at her flat doesn’t offer refreshments of any kind or attempt to be hospitable. She is rude and ignorant about UK culture, which makes me cringe.  Even worse, in the second season her sister comes to stay, and suddenly Clare seems to be worldly and wise, and the sister’s stereotypical ignorance is even more pronounced.  She says’ Edinburgh’ the way it’s spelled, and when a Scot corrects her, her answer is this:

No wonder the world hates us.

The show, unfortunately, only lasts 2 seasons, and it has its problems.  The plots sometimes pick up and let go in weird places, not following much through to fruition. Relationships among the book groupers are fairly incestuous, short-lived, and tempestuous.  But there are also really funny moments that equally mock the intellectuals and the athletes.  It’s a bit like if a couple of cheerleaders, the quarterback of the football team, a girl from the honor roll, the water boy, and a drug-addled student teacher got together to discuss books–to use a thoroughly American high school analogy.  Wait…did I just describe the Breakfast Club?  The point is, it’s a very odd group of people to be in the same room, and that makes for some really interesting and funny situations.

The downfall of the show, in my opinion, is that it is so farcical. The characters let their minds wander away into deep fantasy and I found those scenes jarring and weird, even when they were funny. And when one character dies in the series, the same actor comes in to play his brother, and stays for the rest of the show.

Just a note so that you won’t be disappointed like I was–they almost never talk about the actual books that they read. When they do, however, it’s pretty hilarious.  After watching this, I can comprehend why people hate it when English majors go to their book clubs.  I only hope I’m not like that!

In the end, it’s a fun show, if you don’t expect it to be deep or life-changing. It’s good for a laugh.