I recently watched through this entire series again.  I first watched it about a year or two ago, and had heard only good things.  It didn’t meet my expectations, and I didn’t enjoy it much.  But this time around, it just clicked.  Like any Pegg, Frost, and Wright endeavor (Hot Fuzz, Shaun of the Dead, the World’s End), you get more of the jokes the second and third times through.  I laughed far more the second time.

They meet by chance as both are looking for new places to live.  London’s rental market being what it is (even back when this was made in the ’90s), it’s slim pickings. They find one ad that sounds nice, a flat for ‘professional couples only’.  Though they barely know each other, Tim and Daisy decide to pretend to be a couple in order to get the nice flat.  The rest of the series (2 seasons/series of 7 episodes each) revolves around them, their friends, and the characters already inhabiting the house where they now live.  There’s Tim’s best friend Mike, played by a young mustachioed Nick Frost.

Mike is in the territorial army (sort of) and is obsessed with guns and war. He’s also, just as in Hot Fuzz and Shaun of the Dead, clearly Tim’s hetero life mate.  They are pretty inseparable.

She’s in ‘fashion’ (aka works at a dry cleaner’s).

Once they’re in the flat, they also make friends of the chain-smoking, chain-drinking landlady, Marsha, and the artist that lives downstairs, Brian.

About halfway through the first season, the most important member of the group joins the cast–Colin! 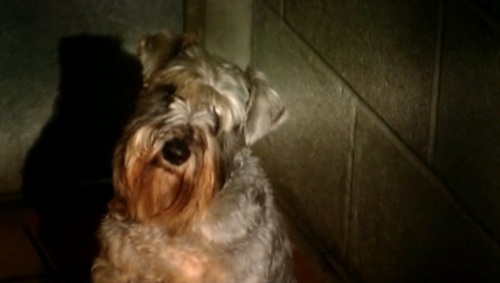 Colin is seriously maybe the third cutest dog I’ve ever seen.  He’s always riding along in backpacks, and being just genuinely adorable.  Want!  Apparently Simon Pegg loved this dog (actual name Ada) so much, that he’s gotten Mini Schnauzers as pets ever since. Understandable.

Here’s what you have to understand about Spaced. Almost everything you see in the show is an allusion to some part of pop culture (TV, video games, movies mostly).  Sometimes there are obvious homages.  A good example is two government employees (one of which is Mark Gatiss) are after Daisy, and the whole thing is a clear-cut homage to the Matrix.  Other references are quick and easy to miss.  Hence me laughing more the second time through.  I would say the ratio of meta references: actual show is about 80:20.  If you don’t get the references, you’re not going to enjoy the show.  And I still don’t get all of them.  And since this show is already nearly 25 years old, the references aren’t getting fresher.

That being said, there are a lot of chuckle-worthy moments in the show, and you’ll laugh more the second or third time through.  Regardless of how many references you get, you’ll think Daisy and Tim (especially Tim) are adorable.  Having seen the entire Cornetto trilogy, it’s easy to look back at Spaced and see it as sort of a jumping off point to what they (Simon Pegg, Edgar Wright, Nick Frost) did later. In those movies, instead of making 60 fleeting references in one episode of a show, they took an entire movie and made it simultaneously an homage and a parody of a genre film.  In Hot Fuzz, they can make a lot of references, visual and dialogue-based, to different action/police movies, but it all meshes into the same theme. The same goes with Shaun of the Dead and zombie films.  And I think, more importantly, they learned how to create a story and scenes that can still hold your attention if you don’t get the reference.

So Spaced isn’t perfect, and it can take some patience, but I think it’s worth it.  If you’re into action movies and are a boy, you’ll probably really enjoy the paintball scene and the fake gun fight scene.

Even when the humor isn’t 100% ‘on’, or you don’t get the reference, the center of the show is still the relationship between Daisy and Tim.  And they are adorable together, in a seriously flawed but still redeemable sort of way.  And that comes through really well, especially in the last 2-3 episodes.