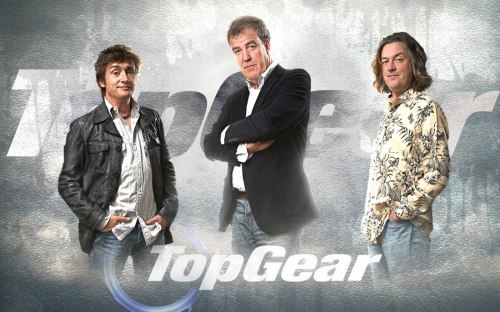 The nineteenth season of Top Gear starts tonight on BBC America.  It premiered in the U.K. last Sunday (the 27th).  This will be the first time TG is airing in the US anywhere near the same time it airs in the U.K., so that is exciting.  And, like Ripper Street, BBC America has decided not to condense the program to fit into a 1 hour block of American TV.  If you’re confused–these shows are both 1 hour in the U.K., but because the BBC doesn’t have commercials, the American networks have to decide how to handle this difference when they import the show.  Previously, BBC America generally removed about 12 minutes of programming from TG episodes in order to fit in commercials and make it take a 1-hour block of programming.  I’m not sure if they’ve changed their strategy because of the popularity of TG and of the network as a whole, or because they realize that sticking to strict blocks of programming time is not as important in the age of the DVR.  Either way, TG will be 1 hour 20 minutes on BBC America, same as Ripper Street.

For those of you unfamiliar with TG, despite my many mentions of it on this blog, let me indoctrinate you a bit.  It stars three morons: James May, Jeremy Clarkson, and Richard Hammond.  James is a pedantic old bore, Jeremy is the most conceited and impatient man in the world, and Hammond is roughly the same as any 10-year-old boy.  Together, they review new cars, discuss trends in motor sports and car culture, engage in challenges (all to do with cars), and there is always a celebrity interview.

If you like cars at all, watching this show is a no brainer.  If you don’t particularly like or care about cars (I’m not exactly a gearhead), there are still plenty of reasons to watch.

The celebrity interviews are unique in that they revolve around the car history of the celebrity in question.  Season 19’s premiere features Damian Lewis (of Homeland fame) sporting his natural British accent.  Each celebrity that comes in goes for a lap in a ‘reasonably priced car’ on the TG test track, and his/her time is compared to the celebrities that have come before.  They get a good mix of the uber-famous (Tom Cruise, Cameron Diaz), musicians (Will.i.am, to some more Brit-centric celebs (Nick Frost, Bill Bailey).  It’s just different than your typical crappy Access Hollywood interview, or some shit you would hear on Ryan Seacrest.  So it’s automatically better.

Most importantly, it’s very funny.  I tend to zone out during a lot of the car reviews, although they are written and explained in a way that makes it easy to understand and engaging to anyone with even a slight interest or knowledge of cars.  But the challenges! They are the best thing.  They make me so happy.  Invariably the guys have to each buy a car for X amount of dollars and cross across Y number of dangerous countries/states/deserts/jungles in order to get bragging rights.  It’s hard to explain what makes this so very funny.  The best I can do is offer some funny moments:

If you’ve never watched Top Gear before, give it a try tonight.  Jeremy tries his hand at making the smallest car in the world, then presents it in front of the cast of the Dragon’s Den (the UK equivalent of the Shark Tank).  Also, a word of warning–do NOT mix up this hilarious and witty show with the American version on the History Channel.  That one is …well it is exactly the same, but with all the charm, intellect, and class taken out.  All of it.  Skip that one, unless you really like flannel shirts, pickup trucks, and the like–in which case, what are you doing on this blog?!