Kermit is pretty much the only one who can adequately describe how I felt reading the big Harry Potter news this month.  NEW content, NEW movies, from J.K. Rowling.  This isn’t just snippets from Pottermore (though I enjoy those too), this is real new stuff in the same world we all love so much.

Warner Brothers and Rowling announced a new partnership on a ‘series’ of films based upon the adventures of Newt Scamander.  Rowling will write the screenplay for (at least) the first movie, because she wanted to ensure that the story was told correctly.  Which means she has had the whole back story for Newt Scamander in her head for years and years without ever needing to use any of it in a book. Scamander’s name is familiar to HP fans as the author of Fantastic Beasts and Where to Find Them. 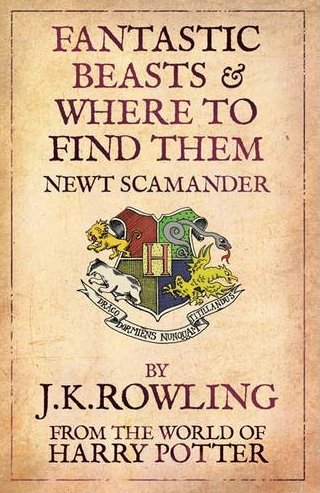 The book (along with Quidditch Through the Ages) is a Hogwarts textbook published by Rowling for charity.  It’s a nonfiction book discussing the history of the control & classification of magical creatures, and describing the more popular/dangerous ‘beasts’ in the  magical world.

I was never particularly drawn to these nonfiction books, but I did read them both after the news came out.  There’s very little in Fantastic Beasts that gives any hint of the plot of these movies.  JKR says they will take place 70 years before the events in the Harry Potter series, so that means the 1920s.  The action will start in New York, but who knows where it will go from there.  The beasts in the book cover most of the Earth, though (naturally) the majority of them are in Europe.

From the book, we know a little about Newt Scamander.  He was born in 1897, so he’ll be in his 20s during the action of the movies. He is British and was in Hufflepuff house at Hogwarts. He works for the Ministry of Magic in the Department for the Control and Regulation of Magical Creatures. His grandson marries Luna Lovegood, though that event will clearly not be covered in the movies.

I’m so glad that JKR is returning to this world, and I really hope that there are little cameos from established characters.  Dumbledore was alive at the time, and I think she will probably have him turn up at some point.  Jo said that Dumbledore was the character she missed writing the most, and hey here’s another opportunity to write him.

That’s about the only person from the Harry Potter series that could reasonably make an appearance, but there are any number of family members that could show up.  Hogwarts and Diagon Alley and all the familiar places could easily show up on film again, which makes me very happy.  Even more exciting is the possibility we might glimpse some wizarding culture from other countries.  Is there a NYC equivalent of Diagon Alley?  I can only hope so. Undoubtedly, the search for magical beasts won’t take place mostly in cities, but I’m just hoping for a glimpse.

I don’t even care what she includes, I’m just so excited to learn more about this world.  Reading every Harry Potter book has been like looking through a pinhole camera. I get a little bit of information and I have a lot of questions, then I get a little bit more information with the next book, and I have more questions.  Most of them were eventually answered, but I will never reached a point of not wanting to know more.

JKR thanked the new CEO of Warner Brothers for making the whole project possible: “I particularly want to thank Kevin Tsujihara of Warner Bros. for his support in this project, which would not have happened without him. I always said that I would only revisit the wizarding world if I had an idea that I was really excited about and this is it.”

Well, all I can say is that I agree. Thank you, sir, for making this happen!