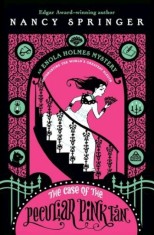 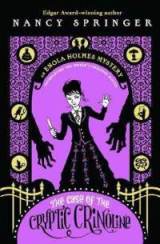 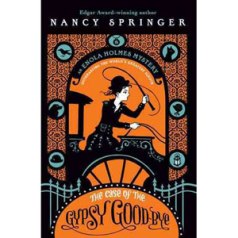 I really enjoyed reading the first three books in this series.  Yes, they’re for kids, and not exactly the most challenging reading. But what they are is well-written, engaging, quick, and fun to read. I had high hopes for the remaining three books of the series.

Unfortunately, these last books didn’t quite meet my expectations. They followed the same pattern as the first three books, which started to wear on me for a while.  The first book deals with a young woman being forced to marry against her will, the second deals with a kidnapping, the third with another missing person.  I’m sure there were a great deal of mysteries in 1880s England, but these books all seem to focus on a missing person. I suppose having your 14-year-old protagonist in a book for kids investigate murders is a little untenable. Still, it’s always a missing person, in some form or another.  And the answer almost always seems to involve breaking or sending messages in code.

I like the Victorian era setting, and love all the period details and historical facts thrown in. I even enjoy the fact that the books are set in the world of Sherlock and Mycroft Holmes, who Enola spends the first four books outsmarting and avoiding, and the fifth and sixth books attempting to forge bonds with.  It all gets wrapped up a little too neatly and easily in the final book.  This is a problem with reading material for children, and I’m not sure it should be.  It’s a thin line for adult fiction to walk — a concise and neat ending is unbelievable to anyone with real experience in life, whereas a non-concise ending that leaves all the ends loose is about the most annoying thing in the world.  Children find it easier to believe in the happy ending, I’m sure, but that doesn’t mean we should always give it to them.  Not that the end of this series was all sunshine and daisies, but it was neat and clean and hopeful in a way that I wasn’t sure the characters had earned. Not for the books to be considered realistic, anyway.  But, they’re for kids.  I am looking at them with my adult eye, but that’s not what they were made for.

I’m glad I read them, but I was unsatisfied by the end.  Also, can we marvel at how great the covers for these books are? I love the design.  I found some other covers, which I think might have been the UK covers. They are much less cool, and feature a rather ugly pug-nosed girl reminiscent of Pansy Parkinson. She also looks more like 12 than 14, especially considering the fact that Enola passes for an adult for the majority of the books. 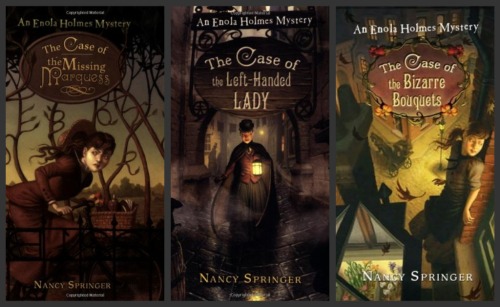 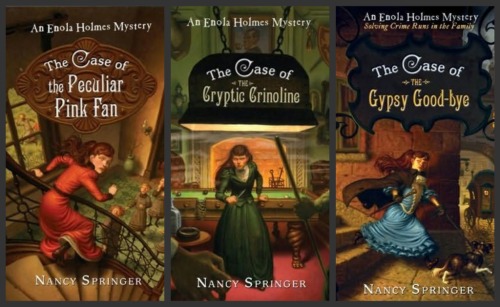 These books aren’t life-changing, or instant classics. But they do feature a strong, smart female heroine who is continuously underestimated by her male-dominated acquaintances. If that’s not a good example for girls, I don’t know what is. They are also quick, clever, and entertaining. If you have a little girl, buy them for her.

I came across these books while searching for some new historical fiction to read.  They are middle grade level, which can sometimes be quite tiresome as the characters are oversimplified for the children that read them.  I was pleasantly surprised by these books however.  It’s not Proust or anything, but I enjoyed reading them and they fed my current obsession with Sherlock Holmes.  Nancy Springer, the author, has been nominated for a few Edgar Awards, so that is always a good sign!

First, let me say to anyone who thinks it’s ridiculous for a grown woman to read books for children: 1-I don’t think there’s anything wrong with reading ‘children’s’ books. 2-Many of the classics of English literature have teen/tween protagonists–David Copperfield, Huck Finn, Scout Finch, Holden Caulfield. 3-I think to keep your interest and imagination as a reader (and as a writer), it’s vital to embrace variety.  Last month, I reread Slaughterhouse Five and finished two modern classics that were challenging and rewarding intellectually.  But it’s also important to view reading as entertainment.  I went through a period in my life where I only read things that were intellectually challenging, and in the end you are burnt out and you don’t want to read anymore.  I like to switch between challenging works and works that are rewarding and entertaining.  These books fall, as do most of the YA I read, into the latter category.

Now that I’ve got that off my chest, on to my review!

I was a bit skeptical of these books when I heard the premise: Enola Holmes is the younger sister of Sherlock and Mycroft.  In the first book, The Case of the Missing Marquis, Enola’s mother walks out of the house on her birthday and doesn’t come back.  Mycroft tries to enroll Enola in a restrictive boarding school, a harsh change after a carefree youth spent in the country, so Enola runs away.

The thing that I ended up really loving about these books–besides the kickass covers–is Enola herself.  She’s 14 when the first book starts, but she is incredibly smart, brave, and honest about her feelings.  She’s a really rare type of heroine and I liked her immediately.  She has the fragility of every 14-year old girl, but she is incredibly self-aware for her age.

She spends the next three books trying to evade her brothers as they search for her, and also trying to fulfill her dream of becoming a ‘scientific perditorian’ or a seeker of things lost. She solves a mystery in each book, though I have to say that her mystery solving is less exciting to me than the fun/challenge of outwitting her brothers. She idolizes Sherlock, but she refuses to fit into the restrictive feminine life that would be her fate if she turned herself over to her brothers.  Because of Victorian law, she cannot control her own destiny until she is 21 years old, so they could do anything they want with her, regardless of her feelings.

Enola has two huge advantages that her brothers don’t really get.  One-she is a female.  She understands things about female life that they would never know.  For example, when she is preparing to run away, she stocks ‘bust enhancers’ and other corset accessories meant to augment a lady’s shape with things like money and food, extra clothes, etc. Ladies of the time had a lot more hiding and pretense in their lives than men did, nor did most men (particularly her bachelor brothers) know how much artifice goes into making a woman beautiful.  She uses that to her advantage.  Two-she is habitually underestimated.  Her brothers always see that she must be desperately in trouble because she is a young girl in the big bad world.  An example: Sherlock attempts to lure her to meet him at one point by sending her a message supposedly from their mother.  She sees through his ploy, and takes the opportunity of breaking into 221B Baker Street while she knows he is off trying to catch her.  She is able to repeatedly slip out from the fingers of both her brothers because she knows how to disguise herself, and because she devotes a lot of time to thinking about what they might be thinking about her.  As I said, she is very self-aware.  She knows they think her an unattractive young girl with a beaky nose, so she disguises herself as a beautiful woman at one point, and fools them both utterly.  It’s a rare 14-year-old that can think of herself so objectively.

Obviously, these books are not for everyone.  But as someone obsessed with Victorian London, going through an extreme Sherlock Holmes phase, and always in the mood for YA Historical Fiction, they were perfect for me.  They are short, quick, and give you a really good perspective on some aspects of Victorian England not usually seen in more straightforward novels.  A lot of fiction from that time was made by men or does not include some ubiquitous parts of society, like the different colors of sealing wax women used to seal letters–each had a meaning, apparently.  I liked the attention to detail, the quick format, and I really loved the heroine.

There are 6 books total, but I have only read the first three so far: The Case(s) of the Missing Marquess, Left-Handed Lady, and the Bizarre Bouquets. The first book mostly revolves around Enola’s escape from her brother’s plans for her, though she is also looking for the eponymous Marquess.  The second book involves another missing noble, a lady who secretly drew portraits of London’s poorest occupants.  The third book revolves around John Watson going missing, and Enola’s attempts to help find him. In each book, she also has to avoid her brothers, always searching for her. I’m looking forward to reading the next three once I order them from Amazon–I haven’t been able to find them in local bookstores.